Why making people smile is so important 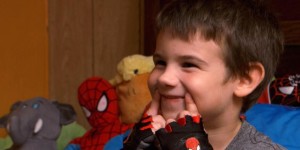 Like Menchie’s, young Jaden is on a mission to make the world a happier place.

Everything we do is in service of our mission of making the world a happier place.

That’s why we wanted to share this story with you. It captures why we do business.

CBS Evening News viewers were the first to be introduced to 6-year-old Jaden Hayes, and several hundred thousand more have since met Jaden thanks to a YouTube video of the report, which shares how 6-year-old Jaden has chosen to cope with the grief of losing his parents by making others smile.

Jaden lost his father at age 4, and his mother recently died unexpectedly in her sleep. He says he was sick of seeing everyone so sad, so he decided to do something about it. With the help of his aunt and guardian, he launched a campaign in his hometown of Savannah, Georgia, to bring smiles to others. Jaden and his aunt go downtown and he finds people who don’t look happy and hands out little toys. His payback, he says, is seeing the smiles spread across people’s faces.

Menchie’s is a place that embraces community and positivity. Our franchisees are drawn to us not just for our business model, but because we offer an entrepreneurial path that allows them to bring something special to their hometowns and to make genuine connections with every guest.

If you’d like to learn more about investing in a concept whose mission is making people smile, we invite you to explore our research pages and fill out the form at right to download the free franchise report.